What if the Solar System was an Atom?

Do you ever find yourself looking up at the night sky, wondering “What does this all mean?”. Since the dawn of man, people have been asking the big questions. “Where did we come from”, “Do we have a creator” and “What if the Solar System was an Atom?”.

As many people spend their time looking up, many spend their time looking down. Observing the micorscopic universe has only been a possibility since the the late 16th century. However, the idea of the Atom was first introduced in around 450 B.C by the Greek philosopher Democritus, and brought back to life in 1800 by John Dalton, who later developed Atomic Theroy.

Atoms are made up of 4 main parts. The center (Necleus) which houses the Neutrons and Protons, and the outer rings which contain the eletrons. The amount of Protons, Neutrons and Electorns within an Atom depends on which element the Atom is. Hydrogen, which is the most abundant element in the universe contains 1 Proton, 0 Neutrons and 1 Electorn, whereas Astatine, which is a radioactive chemical element and the rarest found in nature contains 85 Protons, 125 Neutrons and 85 Electrons. 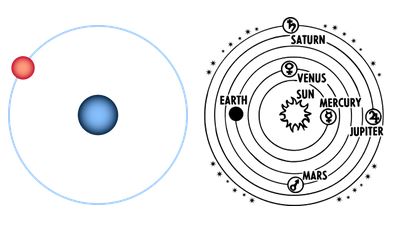 What if the Solar System was an Atom?

The theory that the Solar System is actually an Atom isn’t a new one. It was actually in the 1920’s quantum mechanics first suggested that atoms behave like tiny Solar Systems. Althought there are differences between Atoms and the Solar Sytem, size and matter aside, there are also similarities.

Each electron within an Atom is much like a planet, with the Sun being the Nucleaus, and much larger than the eletons (Planets). If the Sun explodes or “gets split” it releases a massive amount of energy, much like when we split Atoms here on Earth.

Rather than the attraction in Atoms being gravity, Atoms are actually held together by electrostatic forces.

The theroy is far fetched, but there is no dout there are similarities. Much like Atoms are tiny to us, our Solar System may be tiny to a much larger observer.

Any cookies that may not be particularly necessary for the website to function and is used specifically to collect user personal data via analytics, ads, other embedded contents are termed as non-necessary cookies. It is mandatory to procure user consent prior to running these cookies on your website.